“Oldest most respected Pisciculture, Water and Wastewater manufacturer in the USA".

Aqua farming or as some refer “aquaculture”, "mariculture" or even "pisciculture" is already a major business outside of the United States with China, India, and Vietnam being the top three producers and the United States being the smallest.  The growth is being fueled with the rapid demand for seafood within the US as well as the need for high quality protein on a global basis.  The US imports an estimated 86% of their seafood for consumption and it is estimated that only half of that is wild caught. The majority of the seafood produced around the world is done so in some type of aquaculture industry.  From a variety of fish to crustaceans, mollusks, aquatic plants, and algae they are all becoming a major industries around the world and it is estimated by the food and agriculture industry that aquaculture is growing at a rate three times faster than the land based agriculture markets.

The term aqua farming is a broad term when discussing the commercial operations of growing and harvesting aquatic species for profit or survival. The term “mariculture” specifically refers to performing aqua farming in the sea.  Normally mariculture utilizes fish nets to capture the fish species and fish pins to allow them to grow and be harvest along shore lines.  The term pisciculture is specific to aqua farming or the raising of fish inside of tanks or in house ponds.  All of these types of aqua farming and industries are growing at an accelerated rate to meet demand.

Aqua farming has seen an average growth rate of 28% annually and it has quickly become recognized not only as a need to provide the vast quantities of food resources for an expanding population but also as a major industries offering high potential profits.  Major investors have now moved into the space of aqua farming and the aquaculture market has become a commercially controlled industry with large corporations moving into the space to expand their market share and further develop the techniques and technologies.

Aqua Farming Is Not New

it has been around for thousands of years and many cultures have depended on obtaining their resources from the sea or from man made water structures.  Everything from fish farming to the growing of rice is a version of aqua farming and millions of people every day outside of the USA depend on aqua farming in order to feed their families.

With the expansion of the industry and the commercialization of aqua farming many products like salmon, catfish, and tilapia just to name a few comes the need to improve the technique and technologies in order to improve the rate of the harvest as well as the quality of the product.  Safety and the need to meet more stringent regulations which exist in the US also plays a major role in the commercial aqua farming business.  High standards are placed on the aqua farms to assure that commercially grown and harvested products are free from all contaminants, disease, and harmful bacteria that might endanger public safety.  The need to control disease and bacteria is a major focus in the aquaculture industry because if it occurs it can quickly spread to all other tanks or ponds causing major losses and increased risks.  Now with the United States entering the market place in aqua farming and with additional globalization occurring at a rapid rate the land base aquaculture business operations and investments are outpacing the wild caught production. 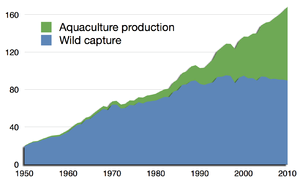 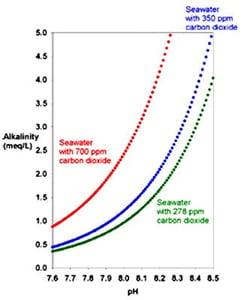 Often the water for seawater aqua farming is either pumped from the sea or it is obtained from the installation of brackish water wells with water quality levels ranging from 20-25,000 TDS or if placed closer to the sea levels can reach 35,000 TDS.  One way water is treated and safeguarded in the aqua farming process is to pump the water to a treatment location where first the pH is properly adjusted.  If the water is from the sea or a brackish water well from the Florida region or Caribbean it may contain higher than normal levels of sulfur or hydrogen sulfide (H2S) which is a naturally occurring contaminant but can be detrimental to fish products that normally grow in other parts of the world where the water is without these conditions. The water is first injected with an acid like sulfuric to adjust the pH to a 5 or 5.5 level which lowers the alkalinity as shown in the graph below.  This will convert the sulfides into a hydrogen sulfide gas where it can then be removed thru a process called degasification.  The degasification process removes the hydrogen sulfide by using an air stripping process where the pressures are altered within the degasification tower.  The science behind the process is based from “Henry’s Law” which states that “dissolved gas is proportional to its partial pressure in the gas phase” and the proportionality factor is called the “Henry’s law constant”.

In addition to removing the hydrogen sulfide the degasification process will also strip and remove the carbon dioxide (CO2) and the pH will rise 1-1.5 levels.  If removing iron in addition to hydrogen sulfide and carbon dioxide the pH is often adjusted to 7 and after the oxidation process is complete within the degasification towers DeLoach Industries recommends post filtration through a series of pressure filters that they manufacture.  This will remove the oxidized iron to a level of 15 microns.  If additional filtration is required DeLoach Industries offers polishing filtration down to as low as 0.5 microns why still maintaining the same level of salinity for the aquatic sea life without adding harmful chemicals.  Different acids have different values and strengths as shown below in the table.

When aqua farming fresh water species the use of other technologies such as carbon filtration can be used to remove other forms of contaminants and impurities.  Carbon absorption increases the operational cost because of the need to regularly replace or regenerate the carbon which is why it is not the most economical method of water treatment for aquaculture and should only be utilized in the final phase of treatment after the bulk of all contaminants have been removed more economically through degasification and filtration.

Many aqua farm species require temperature control much like any type of agriculture greenhouse requires temperature control.  Depending on the desired seafood products to be aqua farmed and the location of the aquaculture facility the water temperature might require altering by either raising it or lowering it.  If the aqua farm is producing a cold water species fish than land based commercial operations will utilize chillers to lower the water temperature unless the water is being extracted in a cold climate location.  In Florida most aqua farm processes that are growing cold water species fish utilize chillers to cool the water.  If the aquatic species that is being raised for market requires warmer water than the use of heat pumps or solar thermal and heat exchangers can be utilized to control the incoming or recirculating water. To remove excess heat, cooling towers or degasification towers can be utilized to lower temperatures.  Most aqua farm operations experiment with temperature control and lighting in hopes of accelerating growth rates which are predicated on feeding habits of the species in lieu of the addition of adding hormones which has been traditionally done outside of the US.  In addition the solubility of carbon dioxide in water varies as the temperature changes as shown in the graph below. 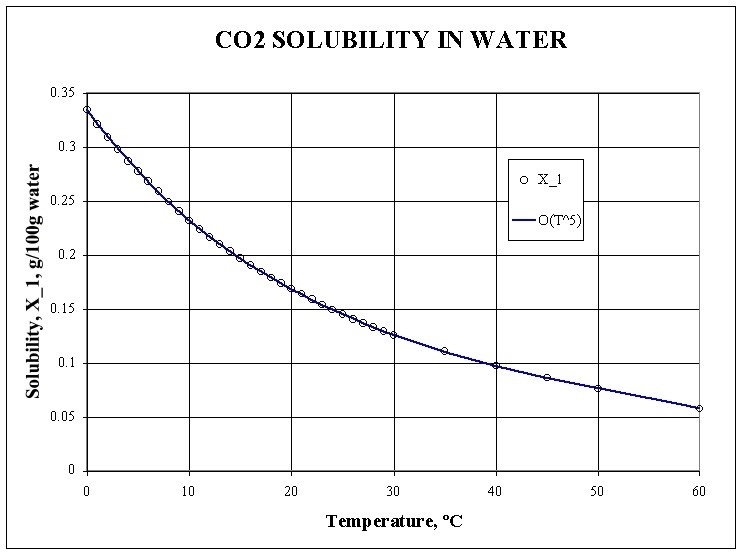 The need to safeguard aquaculture species from bacteria requires some type of disinfection procedure that will not have any negative or harmful impacts on the aquatic life that is being aqua farmed.  The most effective and recommended method by DeLoach Industries is to utilize ultraviolet to treat and prevent bacteria within the water process.  The initial feed water should be treated to kill harmful bacteria spores that are smaller than 0.5-1.0 micron or if polishing filtration is not being performed.  This will initially assure that you are not introducing bacteria into the beginning of the aquatic process.  It is also important to safeguard the water and tanks if the aqua farming is being conducted on land in man made tanks or lined ponds.  With unlined ponds the risk of bacteria and disease increase dramatically due to many variables that cannot be controlled such as the accumulation of the waste products.  In addition, open uncovered tanks and ponds are susceptible to contamination birds and other forms of wildlife that may come into contact with the aqua farming process.  The tanks and ponds must be kept clean to prevent the formation of harmful bacteria and disease that can 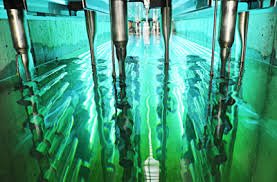 quickly spread to the other tanks or ponds if left untreated.  The use of closed in aqua farming processes provides better control conditions to safeguard against the introduction of bacteria and disease and properly designed farms allow for the quick isolation of tanks should one become infected with a bacteria or disease safeguarding the other tanks and aquatic life. By utilizing U.V. (Ultraviolet Light) at a 254 nano-meter wave strength you can treat the incoming or recirculating water without the introduction of harmful chemicals.  It is best to take these extra precautions first on the incoming water and also on any recirculating water systems.  When it is possible having a straight through single pass flow system is ultimately the best way to help prevent the introduction of bacteria and spread of disease.

For more assistance or information on safeguarding your water or purification of the water contact the professionals at DeLoach Industries Inc. at 941-371-4995.  They can assist you in every aspect of water purification and can recommended the best available process for your particular aqua farming operation.

Are you planning or engineering a process water or wastewater plant?