In an industrial environment,

electric motors are used for a variety of applications. These often include pumping water or other fluids, transporting material on conveyors or lifts, or providing motive force to moving parts of a mechanical device. The electric motor dominates the field whenever something needs to move. Regardless of the end use, all these motors will have one thing in common, a motor controller.

A motor controller is a device with the means to turn the motor on and off, provide circuit protection, and serve as a disconnecting means to render the circuit safe during maintenance. Traditionally, this is done with a direct-on-line (DOL) motor starter. A DOL starter installation consists of a branch breaker combined with a DOL motor starter and overload module. In a typical DOL motor starter installation, the branch breaker will serve as short circuit protection, as well as a means of electrical disconnect. The motor starter unit is essentially a large relay with a magnetic coil and high-power contacts held apart by springs. When the motor is called to run, the magnetic coil is energized, pulling in the contacts and bridging the line side to the load side terminals, allowing power to flow. Once the motor starter has contact, electrical power flows out through an overload disconnect module, and then to the electric motor. The DOL motor starter is a well proven design that is familiar to almost anyone in the industrial space and is still what is found in a majority of applications.

Starting in the 1980’s another motor control technology became accessible, the variable frequency drive (VFD). The VFD was initially developed for variable speed control of AC motors. Speed control is achieved by altering the frequency of the AC sine wave being sent to the electric motor. In the first couple decades of VFD technology, the cost of a VFD was considerably higher than the cost of DOL motor starter. Because of this, VFDs were generally only used on motors where speed control was a necessity for the system, and a DOL starter was simply incapable of performing the task. In the 2020s, VFD usage has become common, and the cost of VFDs has come down to the point where more benefits from operating your pumps, blowers, and other motors can be realized. 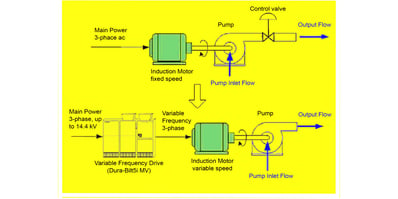 Aside from motion speed control, today’s modern VFDs can provide for an array of other benefits. One major benefit is increased energy efficiency in process systems. In a modern water plant, pumps and equipment are often oversized to provide a certain amount of headspace in capability. It is not uncommon to have a pump running on a DOL starter that discharges into a line using a throttling valve to place artificial back-pressure on the pump and reduce flow. With a fixed speed pump, this, along with recycling and batching are the only real means to moderate flow. With a VFD, the pump motor can be slowed down to a point where the unrestricted flow can be “dialed down” so that the pump and motor are only delivering the amount of work required. This results in power savings every minute the motor is running. A VFD can also be used to help extend the lifetime of connected equipment by implementing “ramp” control of starting and stopping.

Ramp, or acceleration/deceleration control, allows the user to select the amount of time the motor takes to go from a stop to a set speed, and from speed to a stop. By comparison, a DOL starter instantaneously applies full electrical power, and the motor instantly applies full torque. The sudden application of force at the motor causes fatigue in moving and stationary parts over time. Issues arising from start/stop impulse fatigue are lowered transmission belt life, cracked motor mounts, prematurely worn gears and bearings, and pump seal wear. With ramp control, one can command a motor to smoothly reach full speed, and then smoothly ramp to a stop. This reduces mechanical fatigue, and also reduces load spikes on the electrical system. Especially in motor-controlled mechanisms that are something other than direct drive applications, using a VFD can extend equipment life by 20% or more depending on the application.

In addition to flow and speed control, and start/stop ramping, a modern VFD can also provide a wealth of operational data that can be used by plant operators or in advanced predictive maintenance AI systems. During operation, a VFD will monitor a wide array of parameters from current and voltage levels to phase angle separation, power factor, motor efficiency, and more. By leveraging the network and data functions of a VFD, a much greater depth of insight into the operation and maintenance state of equipment can be realized. For example, data from the pressure drop across a media bed, combined with VFD operational data such as continuous draft blower motor RPM and power consumption can be used to predict maintenance needs such as belt changes, media cleaning, bearing replacement, and more.

While VFDs may cost slightly more to install, the wealth of features combined with energy efficiency that they provide make them a very attractive option for any modern motor control task. The ability to fine-tune a process, reduce operating cost, reduce maintenance costs, and gain extra insight about your plant is a valuable set of features that should be considered when choosing whether to use DOL or VFD motor control. As a rule of thumb, I suggest to our customers that they use VFD motor control for any motor larger than 10Hp, and I would practically consider them mandatory for any motor larger than 50Hp. I would suggest that any person in a similar situation to specify or choose the control method for a new or replacement motorized device give serious consideration to upgrading to VFD. For more information or to learn more contact the professionals at DeLoach Industries Inc. at (941) 371-4995.