3D printing is a technology that has only recently become commercially available.

Progress in the last decade has allowed the equipment to excel tremendously.

3D print technology was started in 1987 by 3D Systems Corporation. The technology gained traction in the early 2010s. 3D printing is a type of additive manufacturing that creates three-dimensional parts. By successively adding material layer by layer until the part is complete.

To create the part, a 3D CAD model is required. The potential of 3D printing has led to a wide variety of technologies on the market. This blog will go into depth on the most prevalent types of 3D printing and their applications. 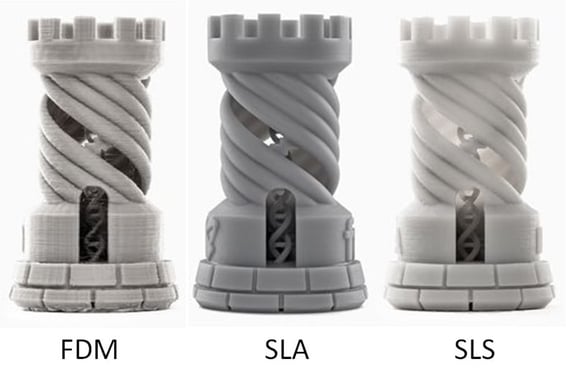 At the forefront of 3D printing technology is Fused Deposition Modeling (FDM). This is the most common 3D printing technique used by enthusiasts due to its ease of access and maintenance. FDM printers work by extruding thermoplastic filaments through a heated head, layer by layer until the final part is created. The most common FDM 3D printed thermoplastic filaments include Polylactic Acid (PLA) and Acrylonitrile Butadiene Styrene (ABS). 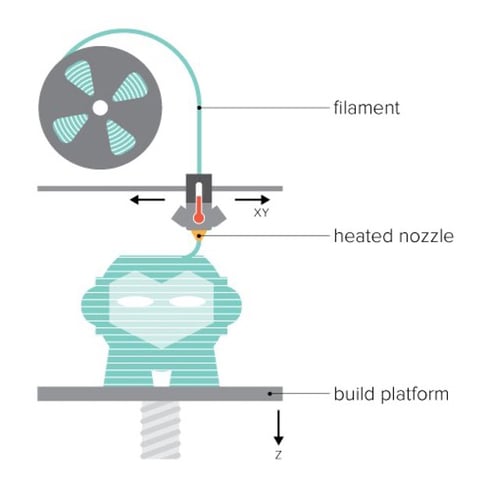 Figure: Diagram of an FDM 3D printer. Note that the nozzle does not move up/down and that the Z-direction of the build platform displays movement downwards. As it prints, the nozzle stays the same distance from the top of the part. The platform moves down one layer simultaneously to keep that distance constant.

Another type of 3D print technology is Stereolithography or SLA.

SLA was invented in the 1980s as the world's first 3D printing technology. It is still one of the most popular for professionals. SLA 3D printers use a laser to cure liquid resin into a hardened plastic in photopolymerization. This process occurs in the reverse of how FDM works.

Rather than printing from base level up, it is effectively pulled out of a pool of liquid upside-down. SLA resin 3D printers have become increasingly popular. They can produce high-accuracy, watertight, and isotropic parts using advanced materials.

Isotropic is when an object has a physical property that is the same when measured in all directions. This provides a seemingly homogenous part, like injection molded parts. Fused deposition modeling parts are produced by printing layer after layer resulting in visible ribbing. SLA parts come with a smooth surface finish and minimal visible layer lines. 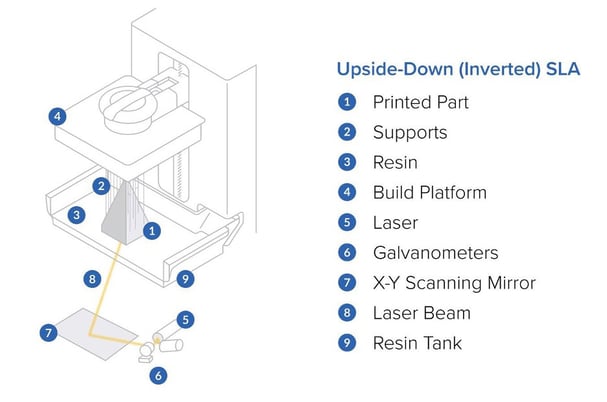 The final 3D printing technology covered in this blog is Selective Laser Sintering (SLS). This technique involves sintering small polymer powders together via a high-power laser. Parts produced using SLS have excellent mechanical strength, resembling an injection-molded part. Since the part is generated via a bed of powder that supports the part, dedicated support structures are not necessary. 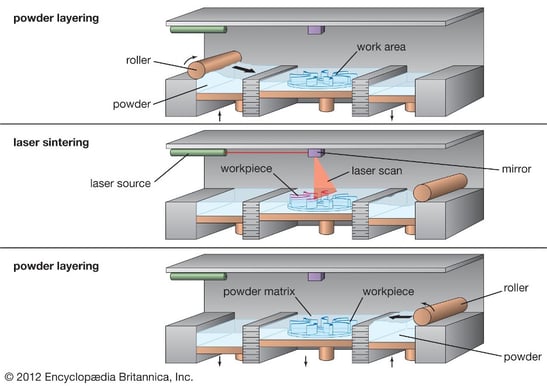 The most common SLS material is nylon. Nylon is a synthetic thermoplastic that is challenging, abrasion resistant, and lightweight.

In conclusion, although 3D printing has become more and more accessible over the years, it is still a future technology. Exploration and innovation drive this technology to become the forefront of prototyping and production-level development. DeLoach Industries, Inc. welcomes any opportunity to leverage our 3D printing equipment. We assist in designing and developing water treatment systems, air purification systems, and new products.