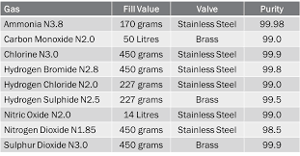 Acid Scrubbers are utilized in the industry

and there are many types of process scrubbers.  First, there are acid fume scrubbers that capture and neutralize acid fumes that are released from the tops of process tanks during manufacturing in several types of industries such as the semiconductor industry.  In addition, there are fume scrubbers that utilize an acid solution to neutralize the off gases that are captured like fumes coming from a caustic tank or a process utilizing caustic solution.  Both of these examples involve the use of a vertical or horizontal type of packed scrubber, but the application is different in that they are being utilized to neutralize a corrosive gas.

Understanding how the source of the odorous of corrosive gas

that is being generated is one of the key steps in the design and selection process.  Without a clear understanding of how and where the odorous gas is being generated you cannot select the best technology for the treatment.  Remember that there are multiple ways to treat and neutralize odorous and corrosive gases but only one way to do it right to prevent long term operational problems and excessive operational cost.  Another key step in the process is documenting the concentration and consistency of the odor contaminates to be treated.  One day perhaps we will have artificial intelligence fully integrated into our process systems to that they can not only function at their peak performance but also make predictions about changes in corrosive acid as streams or even prevent problems in the acid fume scrubber before a critical problem occurs.  If the odor is being generated from a water treatment process it is likely that the concentrations of the odor will remain steady unless other modifications are changed at the water treatment plant facility.  However, if the odor is being generated from a waste water facility or collection system it is quite conceivable that the concentrations may not be consistent through the day, week, month, or even year. A thorough understanding of the concentration levels is needed prior to the selection of the type of odor control system. 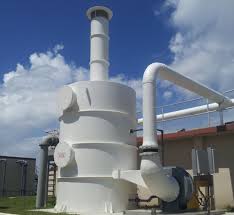 As an example of a wrong solution for picking a process

to neutralize or treat an odorous gas stream would be when a design professional is persuaded to utilize a biological odor control system at a head-works facility that has continuous levels of concentration in the gas stream that change and spike during the day or week.  If this process is selected for this application, it is very likely that during these high concentration spike events the biological odor control scrubber will not perform correctly and it will suffer from what is called “breakthrough” in the off gas exhaust stream.  This is the term used to describe air emissions that pass through the intended treatment process but remain untreated or at levels above the set design parameters.

The reason this would occur

on a biological odor control scrubber in this example is that the bacteria bed and colony density that is seeded on the media bed cannot adjust quick enough to a rapid increase in concentrations from the air stream to allow the bacteria to consume the organic or inorganic contaminants so this allows untreated odorous gas emissions to exist the biological odor control scrubber.  Had the design professional been made aware of the conditions in advance or the limitations of the biological scrubber to react to spikes or surges they may have either selected a chemical odor control scrubber or required a modification to the biological odor control scrubber such as an increase in the colony density on the media bed with a nutrient feed system designed to maintain the bacteria activity to the higher concentration level.  This modification however will increase the operating cost of this system and that should also be evaluated during the design phase to make an informed decision on if the system being considered is the best choice or perhaps a different system should be selected such as a chemical scrubber.  Remember, when treating hydrogen sulfide gas (H2S) you must consider that you are treating both an odorous gas and a corrosive gas at the same time.  DeLoach Industries often recommends that two different types of odor or gas control scrubbers be integrated to provide the lowest cost solution for a process air stream.  In addition, we recommend careful examination of the need to monitor and control the pH of both the scrubber re-circulation system and also the blow down waste stream.  To learn more about different types of scrubbers and for more information contact the professionals at DeLoach Industries Inc. at (941) 371-4995.