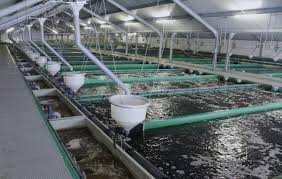 from water in the pisciculture and aquaculture market is extremely important. In order to achieve maximum results, the industry utilizes a treatment technology called “Degasification” and controls the pH precisely to maximize results. When utilizing equipment such as the DeLoach Industries degasification systems the hydrogen sulfide and carbon dioxide levels can be removed to 99.999% ug/l. 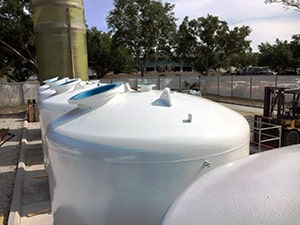 Why is pH important and what it means in water? As it relates to water pH it is a term used to describe whether or not the water is “acidic” or “basic”. pH ranges in water can be from 0-14. 0 is the most acidic and 14 is at the far end and is the most basic so that leaves “7” as the neutral state. A pH of 7 is neither acidic nor basic. So, what causes pH to be acidic? In nature the most common cause of a low acidic pH in water is carbon dioxide (CO2) which occurs naturally when photosynthesis, decomposition, or respiration occurs in nature. The increase in CO2 causes an increase in ions which in turn produces a lower pH in a simplified explanation.

How does pH play such a significant role in Aquaculture and Pisciculture? The removal of certain harmful elements is typically a requirement to safeguard the growth of most aquatic species and elements such as sulfides, sulfates, and free H2S hydrogen sulfide gases are dangerous and can often kill many types of aquatic life. To maximize the removal of hydrogen sulfide from water utilizing a DeLoach Industries degasification tower it is important to maintain as close to a pH of 5 as possible. When the pH begins to rise above a 5 the ability to both convert and to strip the free H2S gas from the water diminishes. When a degasification tower is operating within this specific range and if it has been designed with the higher efficient distribution systems such as the ones utilized by DeLoach Industries than removal efficiencies of 99.999%- 100% can be achieved. If the pH rises to a 7 or above the removal process becomes much more difficult and typically you will much lower results. The adjustment of the pH during the water treatment process is normally accomplished by adding some type of commercially available acid such as “Sulphuric Acid” as one of the most common within the municipal and food and beverage industry.

How do you naturally raise the pH in water for aquatic applications? If you are treating water that either already has a clot of free CO2 naturally or if the water pH has been previously adjusted lower either to remove H2S or prevent stress on aquatic life than most likely you already have carbonic acid and free CO2 present within the water. So, when utilizing either a DeLoach Industries degasification tower system the CO2 gases are removed during the degasification process and the Co2 is vented into the atmosphere. When this occurs, you will see the pH of the water rise. Typically, if the pH is 5 then after degasification the pH will have risen to 6 or as much as 6.5. Normally in most pisciculture or aquatic application the inlet pH is set at 5.5-5.7 and the effluent water pH levels are raised to 7 without the addition of any more chemicals. When removing the free CO2, it allows the alkalinity to rise and become more basic (neutral). Now there are some cases when there are different types of acids used or the pH is taken down too low or all of the organics have been removed when the pH rise may be minimalized during the process. This is why understanding water chemistry and the specific application and need are very important.