H2S is a naturally occurring chemical compound created in nature with the decay of organic material. Hydrogen sulfide is a chemical compound with a molecular formula comprised of (2) hydrogen atoms and (1) one sulfur atom. The formula is displayed as H2S. The gas is a colorless hydride, often known as the “Rotten egg gas.” This gas is very dangerous as it is poisonous and toxic to all life forms. It is also very corrosive and flammable. The H2S molar mass is 34.1 g/mol, with a melting point of -76 F (-60 C) and a melting point of –115.6F or (-82C).

Hydrogen sulfide gas is also created more often from a byproduct of a manufacturing process or the removal of water or wastewater treatment systems. In wastewater, as organic material decays, H2S is released, captured, and treated to protect human lives, reduce corrosion, and reduce odor complaints. Hydrogen sulfide gas is produced during the manufacturing operations at refineries, pulp mills, and mining. These high levels of H2S are released during manufacturing. They must be captured and neutralized to protect human life from unwanted health effects such as pulmonary edema and prevent excessive corrosion to your system. You cannot even smell the gas at higher concentrations, and it is not distinguishable as the “rotten egg gas,” which makes it even more dangerous and drives the need for hydrogen sulfide scrubbers equipment, fume scrubbers, or odor control scrubbers. 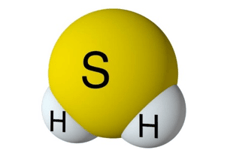 According to the “Agency for Toxic Substance & Disease Registry,” those who work within certain industries are exposed daily to higher levels of hydrogen sulfide gas than the normal public. Because the gas is also heavier than air, it will settle into lower places like manholes, tanks, and basements, and it will travel across the ground filling in low-level areas. To protect the public, OSHA (occupational safety and health administration) has set guidelines and rules known as “Permissible Exposure Limits” (PEL). A PEL is a legal limit a worker may be exposed to a chemical substance. The PEL limit for hydrogen sulfide is ten parts per million (10 ppm) over eight hours.

Exposure to low levels of H2S can cause burning eyes, sore throat, coughing, and shortness of breath.

Using a hydrogen sulfide scrubber, you can remove the harmful gases below the PEL levels. DeLoach Industries Inc. manufactures a wide range of hydrogen sulfide scrubbers that capture and treat the gas to neutralize it before venting it into the atmosphere. Often scrubbers are referred to as odor control scrubbers or fume scrubbers. This is because it is very common for other types of gases like methane or other chemicals to be present in the gas stream, which is also treated and neutralized. 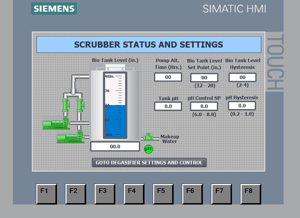 Did you know hydrogen sulfide scrubbers are comprised of a vertical tower or two towers in series? The dangerous H2S gas enters at the bottom of the vertical tower, which contains water and often a neutralizing chemical agent like chlorine or caustic. These towers are typically made from fiberglass because of its ability to withstand corrosive conditions. However, carbon steel and stainless steel can be used with special coatings on higher temperature scrubbers. 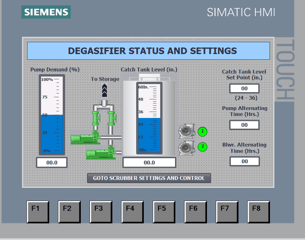 The first hydrogen sulfide tower would be equipped with recirculation pumps that pump chlorinated water produced by injecting sodium hypochlorite into the tower's stream or base. This liquid is pumped up to the “distribution” system of the tower. The distribution system evenly sprays the liquid over a media bed inside the tower. Gravity allows the liquid to cascade across the media bed as the toxic gases travel upward.

The chlorinated water reacts with the hydrogen sulfide forming elemental sulfur precipitates material that is later removed during a waste blowdown process. To ensure all removal of the hydrogen sulfide gas. A second tower is utilized with a similar recirculation system. Still, instead of chlorine, it will often utilize a caustic (NaOH) as a polishing method to ensure all hydrogen gas is removed from the air stream.