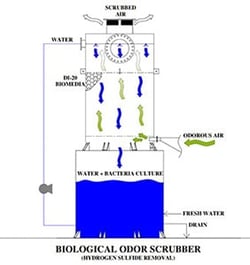 A manufacturing facility cannot ignore the importance of odor control.

The smell from chemicals, vapors, and fumes can spread quickly in a small area. They cause discomfort to workers and pose health risks to them. In addition to that, excess vapors directly impact the efficiency of exhaust or natural ventilation systems. For example, an odor control scrubber tower is an additional layer in the ventilation system of a manufacturing plant or chemical processing facility that has issues with odors. These towers effectively remove noxious fumes and odors from ventilation exhaust streams using an activated carbon filter and an ionic air filter.

Reasons why you should consider installing an Odor Control Scrubber Tower :

Everyone working in an industrial environment, either directly or indirectly, is at risk of exposure to hazardous fumes and gases. At times, high concentrations of these gases may be emitted into the atmosphere in the form of unhealthy odors, putting the health and safety of the workers at risk. These gases may even be combustible in some cases, posing a significant threat to workers. The purpose of an odor control scrubber tower is to remove these gases from the contaminated air stream and help the workers stay safe. In addition, it reduces the risk of health issues such as nausea, headaches, loss of consciousness, allergy symptoms, dizziness, and many more. It also prevents workers from missing their daily performance targets due to sickness caused by toxic fumes.

Although it is vital to protect the workers from exposure to harmful fumes, it is also essential to protect the environment. Odor control scrubbers are used in petrochemical refining, pharmaceutical, food & beverage, paper, mining, chemical, and pharmaceutical industries. Therefore, it is crucial to choose the right type of scrubber that suits your industry’s requirements. The right choice of equipment also protects the environment as it helps reduce operational costs and maintenance supervision. It also protects the environment because it produces minimal sludge and reduces the risk of corrosion.

Some gases need continuous monitoring, and the best way to monitor them is through an activated carbon odor control scrubber tower. Many industries use activated carbon to remove the odor from their stacks. It is a cost-effective solution that has low maintenance costs. It is a good choice for industries that emit pungent odors harmful to the environment. For example, the activated carbon used in the scrubbers removes harmful gasses and hazardous vapors such as ammonia, hydrogen sulfide, and hydrogen cyanide. It is also commonly used in the petrochemical industry, where there is a high level of hydrogen sulfide. Activated carbon is a porous substance used for the adsorption of many different types of impurities. Activated carbon is a highly porous form of carbon treated with steam at a high temperature. It creates millions of porous pores several hundred times larger than the impurities.

Odor control scrubbers are less expensive than alternative options. They can be installed as an add-on to the existing system and add value to the plant. They are cost-effective and come in different sizes that can easily integrate into an existing system. If equipment malfunctions, it will not affect the entire plant. It will only affect the particular area supplied by the equipment. It increases the reliability of the equipment and makes it easier to maintain. It is ideal in areas where the risk of explosion is high. For example, it can protect workers in case of gas leakage, as it will reduce the amount of gas entering the plant. The carbon filters used in the scrubbers are inexpensive and require minimal maintenance. Therefore, it is ideal for industrial areas with a high concentration of harmful gases, such as the manufacturing of paint, rubber, plastic, and chemicals.

Reduces the risk of fire and explosion.

The risk of fire and explosion increases when the concentration of harmful gases increases. Odor control scrubbers reduce harmful gases in the air and provide a safe environment for the workers. Reduces the risk of fire and explosion by providing a clean environment. The air scrubbers used in the system remove the contaminants and gases from the air, and the ventilation system removes the contaminated air from the room.

An odor control scrubber tower is a piece of efficient equipment that can be used as an additional layer in the ventilation system. It can handle gases that are hard to remove with standard air filters. Removes a broader range of contaminants than by just using an ionic air filter. There are many reasons why you should consider installing an odor control scrubber tower in your company. It is vital to protect the workers from harmful fumes, protect the environment, and the surrounding neighbors, reduce the risk of fire and explosion, and reduce operating costs. It increases the efficiency of your ventilation system. Finally, handling toxic chemicals and fumes safely and properly is crucial.