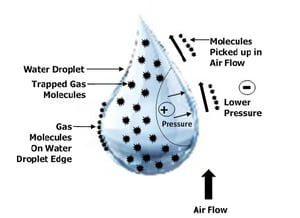 A forced draft degasifier is the leader and choice for water purification in industrial applications like the semiconductor industry and chemical refining and is comprised of a vertically design tower constructed from either fiberglass, steel, stainless steel, or aluminum and contains a specified random or structured media packing, and distribution system, media support plate, sometimes wiper rings for redistribution, and a low pressure centrifugal blower operating at a range from 1-8 inches of water column pressure (WC). The media is selected based upon the type of contaminant, the other elements in the water, the temperature of the feed water, pH, LSI, and required removal efficiency. Water enters the forced draft degasification tower at the top and by gravity and specific weight of the water travels downward where it encounters a cross current airflow. As the water is constantly reshaped by the media Ntu values (Number of turn units) more and more molecules of dissolved gases are forced to the surface of the water where through the proportional pressure laws (Henry's Constant) the gases are stripped and released into the counter current airflow and then exhausted at the top of the degasification tower.

The forced draft degasification system requires a calculation and design to maximize removal efficiency and avoid costly design mistakes. Based upon the flow a hydraulic load calculation is performed in relationship to the mass gas transfer coefficient needed to achieve removal efficiency results. If the forced draft degasifier design is sized incorrectly and too small in can results in a condition called hydraulic flood. If it is calculated to large it can cause a condition called channeling. In both cases results will not be as desired and the impact can be the operating cost of your cation and anion resin, membrane system, or boiler equipment. 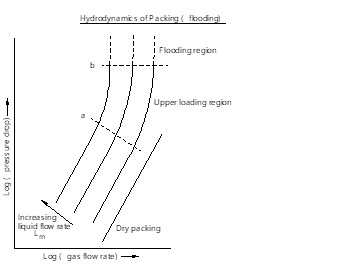 The company began in 1959 and played a major role in the development of reverse osmosis and degasification to preserve cation and anion systems and produce purified water for industries like the semiconductor market and others. For all of your needs in this area including the newly developed artificial intelligence water system DeLoach Industries offer full technical support and a 60 year lifetime of knowledge. For more information or to learn more contact the professionals at DeLoach Industries Inc. at (941) 371-4995. 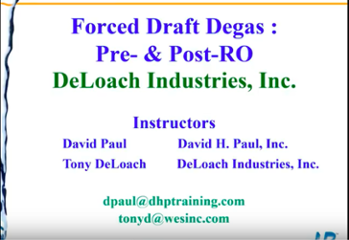