The selection of what type of Degasification tower

system should be based on the specific applications, site conditions, and water chemistry. You will normally see a degasification tower utilized downstream or post treatment of a reverse osmosis system and prior to an Ion exchange cation or anion system. The reasons are simple, the degasification tower system is the most reliable and economical method to water treatment to safeguard your boiler and the feed system. 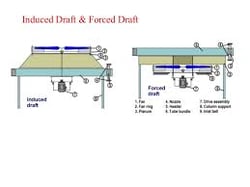 There are two types of degasification towers and they are referred to as “Induced Draft” or “Forced Draft”. An Induced type of degasfication tower pulls the air up and through the tower and the gases pass through the blower. On a forced draft degasification tower the blower pushes the air up and through the tower and the blower is only exposed to fresh intake air. In most industrial applications you will find “Forced Draft” type units. Both types of degasification towers perform the same and at DeLoach Industries we have tested both types with our other pre-and post-treatment systems and had similar results but the forced draft type system allows the designer and customer to push the exhaust air either out of a facility or into an additional treatment system for air emission control when needed. To learn more and for more information or to learn more contact the professionals at DeLoach Industries Inc. at (941) 371-4995.