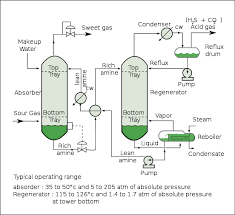 Ammonia (AM) is a common water pollutant that significantly impacts the water process industry. It is not just polluting water bodies but also aqua wells and humidifiers. Generally, AM is produced from human sweat and urine and created from synthetic ammonia in industrial process systems.

Ammonia has three types of amines – primary, secondary, and tertiary – all are toxic for humans and aquatic life.

Primary amide can form by the dehydrogenation of nitriles, such as acetonitrile, which are further oxidized to form acetic acid.

Primary amide form by alkaline hydrolysis of nitro compounds such as 2-nitrophenol.

Process systems often need to recognize when the Degasification or Decarbonation system is failing or underperforming.