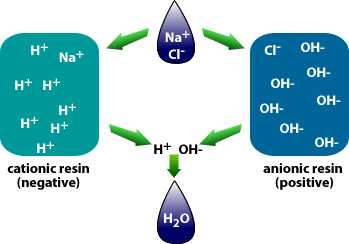 In these applications, the dissolved solid ions are removed utilizing hydrogen ions H+ and hydroxyl ions OH-. The net yield of this process is H2O or water. So it would be simpler to say that demineralization is a higher form or more target-specific form of ion exchange in that it removes almost all solids near distilled water why do other forms of Ion-exchange remove certain types of dissolved minerals but may replace one for another? This may resolve a hardness or scaling problem but allow an increased level of other forms of dissolved solids, such as sodium. DeLoach Industries Inc. is one of the oldest water treatment equipment manufacturers in the United States with its 63-year history. At DeLoach Industries Inc., after their experts assist the customer or their engineer with reviewing the water analysis and the specific application, they select the type of equipment, size, and specific resin beds needed to achieve the desired water quality by the customer. In addition, the engineering design team at DeLoach Industries applies years of experience in treatment plant operations and the need to reduce operating costs in every design. The design team will identify critical components that will reduce operational costs and potential headaches for their customers and make design suggestions backed by written engineering calculations showing operational cost reductions. The addition of a decarbonator to a process stream is an example of a recommendation by DeLoach Industries to remove carbon dioxide to extend the life of a resin bed and reduce regeneration cycles.

Demineralization systems consist of a minimum of at least one pressure vessel. Still, they often require two for industrial applications. The DeLoach Industries systems are skid mounted at the factory, including chemical feed storage tanks, regenerative automatic dosing system, and PLC fully automated control system that is factory installed pre-wired. In addition, all plumbing and valves can be manual or automated depending upon the customer's selection and are included, factory-installed, and tested on every DeLoach Industries system. All the DeLoach Industries systems are factory tested, include the resin bed charge, and come with full support, including setting up, start-up, balancing and testing, and training. Demineralization is utilized in multiple market industries and is widespread in the industrial markets to treat boiler feed water. It is not uncommon to see both membrane treatment and demineralization utilized in series to create higher purity water.

Almost always, in a demineralization process, you will want to incorporate a “Decarbonator” or Degasification” process to remove all CO2 (Carbon Dioxide). By removing the CO2, you will extend the life of the resin bed within the demineralization process. If you need to remove hardness, calcium, or other dissolved solids from your water, please contact the experts at DeLoach Industries. They will assist you on your next project and choose the design selection for your specific needs. If your existing system has operational problems, the engineering support team at DeLoach Industries will be happy to help you solve your problem. Feel free to contact DeLoach Industries at 941-371-4995 or look us up at DeLoachIndustries.com so they can be replaced during the process. 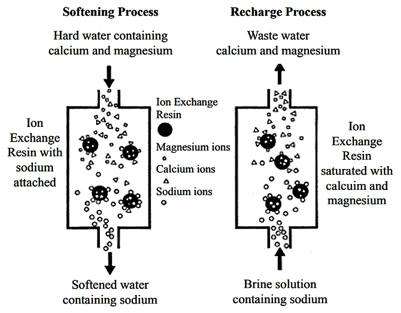